A Fantastic Donation Marking the End of War in Europe


Horsham Museum & Art Gallery is delighted to announce that it has recently received the exceptionally generous donation of an original Constable sketch depicting a rural scene, including trees and a barn.

The beautifully realised drawing of a tree in full leaf captures the sense of movement along with the intricacies of branches, twigs and leaves intermingling. This remarkable donation has an equally extraordinary story that goes back 76 years to the middle of World War II.

People’s perception of World War II is that it was all out war with everyone devoted to the war effort but, in actual fact, daily life went on as close to normal as possible. Leading museums and art galleries remained open including Agnews, the leading Old Master gallery in London, which held its annual Watercolour and Drawing exhibitions during the war. At this time watercolours were seen as quintessentially English and therefore worth preserving and fighting for. And which artist represented Englishness better than any other? Constable or course. So it was that in the months before D-Day Agnews held their 71st exhibition featuring drawings taken from the Constable Sketchbook.

One of the visitors to the Agnews exhibition was a leading English watercolour artist and teacher who had been asked to tutor Princes Margaret during the war, but had turned it down. This artist saw the pencil sketch and bought it for 5 guineas (£5 5/-) which, in simple inflationary terms is around £227 today, but it more accurately represented spending the equivalent of £1,116 at the time. The sketch came to Horsham, where it was displayed in the home of that artist and teacher, Vincent Lines, the Head of Art at Horsham School of Art. Today, some 76 years later, it is being donated by his family to Horsham Museum & Art Gallery and will feature in the forthcoming World War II exhibition.

Vincent Lines’ decision to buy the sketch suggests that he believed that there would be a positive future after the war. The nation knew that Europe would be invaded, especially after USA entered the fray, but there was no guarantee of how long the invasion would last, or whether it would be successful. Many people also feared that they, or their loved ones, would not survive to see the end of the conflict. The purchase therefore reflects not only a great interest in art, but also a strong belief in the future.

Today, during COVID-19 pandemic, the Government have put in measures to help people survive the crisis. During World War II, with no Welfare State to call upon, the art community was worried what would happen to the blossoming group of artists who had grown and developed in post-World War I Britain. Sir Kenneth Clark, inspired by the American model used in the Depression, approached the American Pilgrim Trust for £4,500 to save “the whole tradition of English art”. The money would pay 25-30 “of our best landscape painters” £5 a week for 6 months to paint Britain, creating a record of a country before it was destroyed. The Trust gave £2,500, with which some 1,500 paintings were executed, including over 30 by Vincent Lines. The paintings were circulated around Britain but it wasn’t until the 1990s, when they were returned to the Victoria & Albert Museum, that their importance was recognised. You can see the sketches and paintings by Vincent Lines on the V&A’s web site. Lines not only painted Horsham, but also Wiltshire and the Welsh borders.

We are immensely proud to receive this brilliant Constable sketch, in which, with today’s art appreciation eye, we admire the drawing of the tree more than that of the barn. At the time Lines purchased the sketch, possibly under the influence of the Recording Britain project that focused on buildings, Agnews highlighted the barn drawing in their catalogue. This wonderful sketch would now be in Horsham District Council’s Horsham Museum & Art Gallery however, due to travel restrictions the family cannot deliver it to us yet. They have sent us a selection photographs of the sketch that reveal how superb it is and how an addition it is to the Museum’s watercolour collection, as well as the archive of Vincent Lines material already gifted by the family to the Museum a couple of years ago including a self-portrait.  The Constable sketch not only marks a significant development of the Museums art collection, but also tells a fascinating story of Britain in WWII. 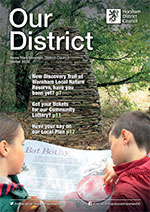