We consider all home extension planning applications against the Horsham District Planning Framework. Any new development should be of a high standard of design and layout and take into consideration its natural and built surroundings in term of scale, density, height, massing, siting, orientation, views, character, materials and space between buildings.

An extension should be of a scale which is sympathetic to and does not overpower the original building. The following advice is a starting point for issues to consider before you finalise your plans for a home extension.

The front elevation of a building is usually the most sensitive and an extension here could potentially have a significant impact upon the appearance of the building and the street scene. It should generally therefore be avoided.

Any front extension to a terraced or semi-detached dwelling or other dwelling set close to a road should normally be small scale and single storey, and incorporate a pitched roof. Dwellings that are well set back from the road and have large gardens may be able to accommodate two-storey front extensions or larger single-storey extensions without changing the appearance of the street scene so significantly.

The rear window to rear window distance between any habitable rooms (living rooms, bedrooms or dining rooms) should be at least 21 metres in situations where first floor windows of separate properties face each other. However, this objective may be varied in some circumstances depending on the character of development in the surrounding area.

Where a blank gable is proposed, a minimum of 10.5 metres should be provided between the extension and any windows serving a habitable room in the adjoining property. Again, this may be varied depending on the character of development in the surrounding area and if there are other windows serving the affected room. 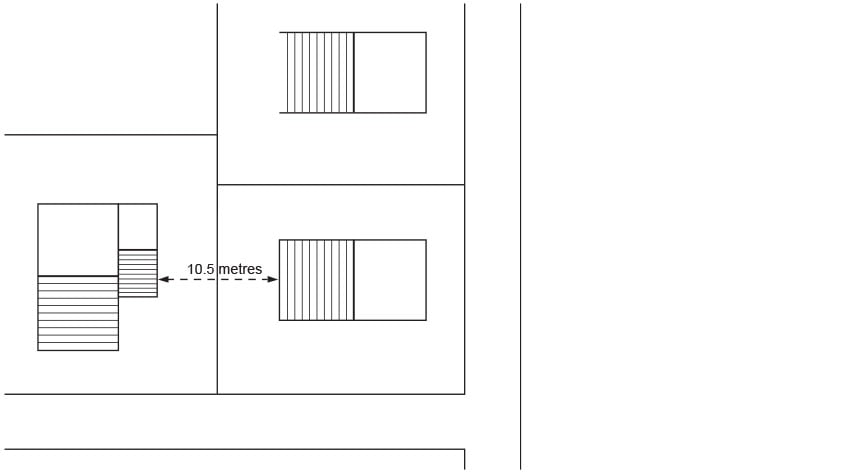 Rear extensions should not have an overbearing impact or over dominate adjoining properties.

A single storey rear extension to a semi-detached or terraced property over 3 metres deep will normally only be permitted where it does not protrude beyond a 45 degree line drawn in a horizontal plane from the centre line of any window of a habitable room of an adjoining property. 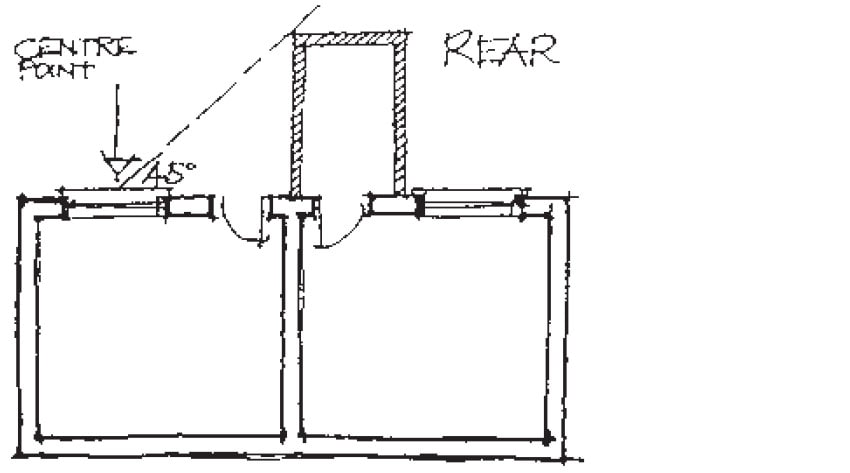 Single-storey extension to a detached property

Single storey rear extensions to detached properties should not protrude beyond a 60 degree line drawn in a horizontal plane from the centre point of any window from an adjoining property.

Pictured is an acceptable single-storey extension to a detached property. 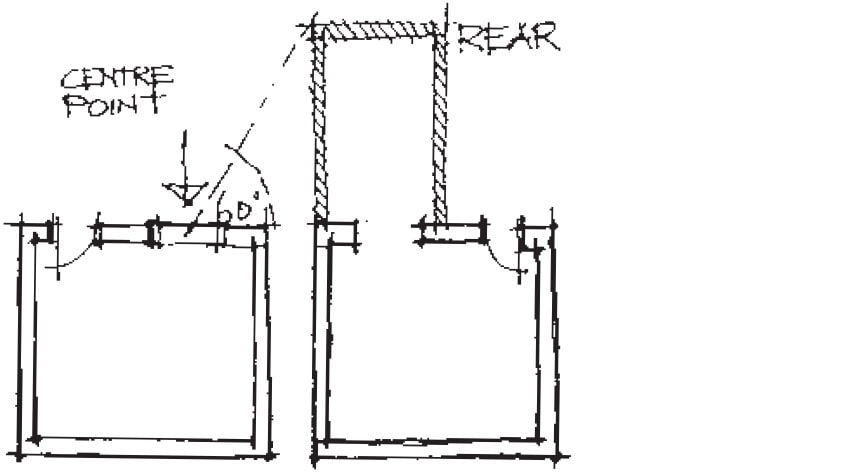 Because of the additional impact a two storey or first floor extension may have it will normally only be permitted to a semidetached or terraced property where it does not protrude beyond the 45 degree line drawn in a horizontal plane from a quarter point of any window of a habitable room in an adjoining property.

Pictured is an acceptable two-storey or first floor extension to a semi-detached or terraced property. 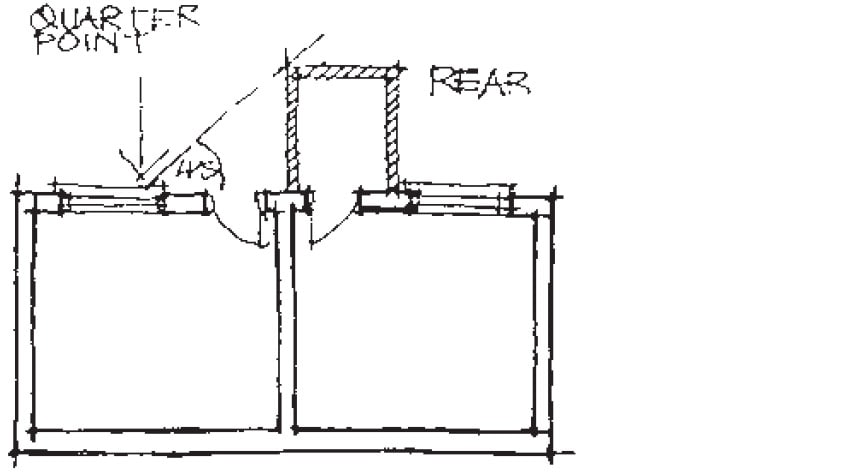 On a detached house, a two storey or first floor rear extension should not protrude beyond a 45 degree line drawn in a horizontal plane from the centre point of any window of a habitable room of any adjoining property.

Pictured is an acceptable two-storey or first floor extension to a detached property. 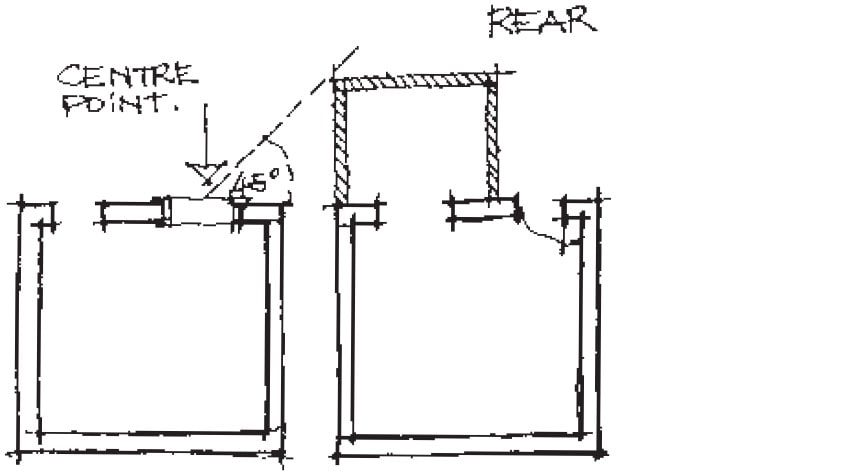 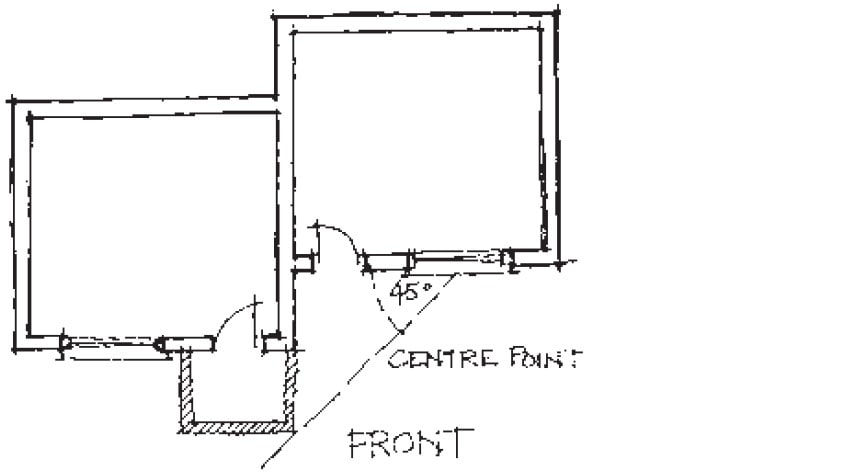 A side extension should appear as a smaller element when viewed against the main house and it may be appropriate to lower the ridge line. Extensions should have a pitched roof. Flat roofs should be avoided.

Pictured is an acceptable single-storey extension.

It is important that an extended property does not appear cramped. To avoid the terracing effect that sometimes occurs when two-storey extensions are built to the boundary of the site, a one-metre gap should normally be retained between the extension and the site boundary. These requirements may be varied depending on the particular circumstances of the site. It may be possible to avoid terracing by setting a two storey extension back from the property’s front elevation. To be acceptable such set back should be significant.

We will not normally grant planning permission for extensions to existing dwellings where access is not provided or retained to the rear of the property. Access through a garage is considered to be a satisfactory alternative arrangement. This reflects the Council’s guidance on refuse and recycling as a rear access avoids the need to take waste through the property and also allows access for emergency services.

The relationship of a garage to the main house and its appearance in the street scene can be sensitive. Garages should be of a good design and constructed in materials similar or complementary to the main house and should have a pitched roof. The scale of the garage should reflect the scale of the house that it serves. Garages built forward of the main house should not appear unduly prominent in the street scene or detract from the pattern of surrounding development. Where garages are attached or adjacent to the main house, the Council would normally expect to see the garage set slightly back from the front of the house and a one-metre gap retained between the extension and the boundary. If a one-metre gap is not retained then the Council would expect the layout to allow access through the garage to the rear garden of the property.

Dormer and window roof extensions should be designed so that they do not appear above the ridge line of the dwelling, are set into the roof slope and are in proportion to the existing roof. The Council will normally require the following:

The most common circumstances where the characteristics or features of a site may mean that the guidance cannot be applied or may need to be modified are where:

The location of the site will also be relevant i.e. is it in the town centre, as well as the existing character or the surrounding area. All planning applications need to be considered on their individual merits.