We currently have 15 families and community groups trialling Hot Bins to see how it helps minimise their food waste.

A Hot Bin can take cooked food waste (including bones), peelings, pet waste and more and turn it into rich compost in 30 – 90 days by heating the waste up to 60°C. The result is a nutrient-rich compost for your garden for minimal effort and reduced food waste in your rubbish bin.

Meet our new round of trial participants and stay up to date with how they're getting on. 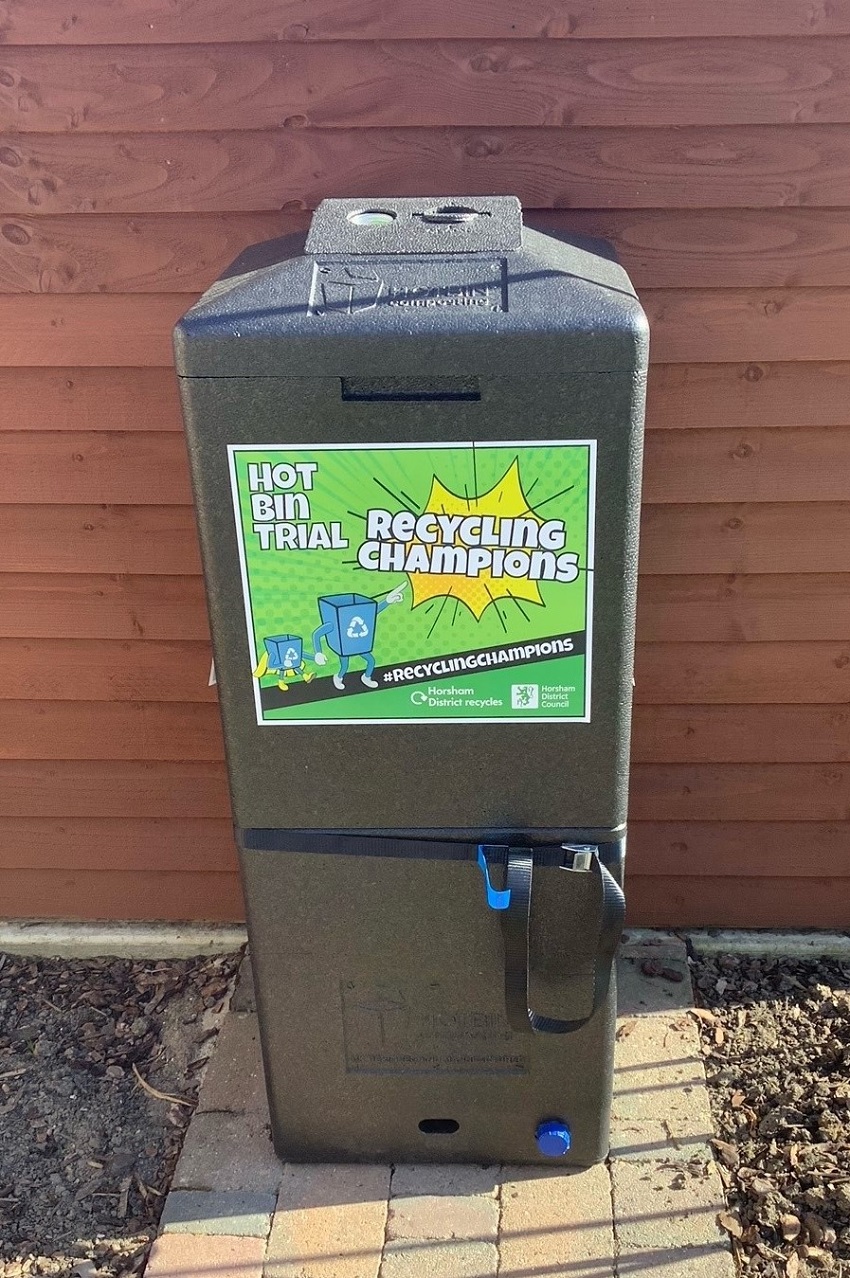 One of the first community groups to trial the Hot Bin is St Mark’s Church in Holbrook, Horsham.

St Mark’s Eco-Champion Karen Parks commented: I have successfully used a Hot Bin in my garden for years for food and garden waste. We are so pleased that children from Holbrook Preschool and New View Nursery, who meet next to the church in North Heath Hall, are helping with the trial, by collecting and weighing their food waste and adding it to our Hot Bin. We look forward to providing updates during the six month trial for more insight into how a community Hot Bin could work.

"We are delighted to be participating in the community phase of Horsham District Council’s Hot Bin composter trial. As a Silver Award Eco Church, now going for Gold, we are keen to do all we can to help increase recycling rates.

"We will be collecting and weighing peelings, food waste, tea bags and coffee grounds from the vicarage, church and church hall for the Hot Bin. We look forward to using the compost to help us grow fruit and vegetables in the church garden to bless our community."

"At Horsham Matters we are always looking at ways to reduce our waste, save money, and help the community. The hot bin will allow us to do this by putting our food waste there and turning this to compost for community garden projects. Also, this will help us cut the cost of waste food collections."

"I'm always keen to minimise waste but as a small household I didn't think it was possible to compost my limited kitchen waste so when I heard about the Hot Bin trial I was keen to have a go. I'm hoping to make enough to boost the soil in my veg plot."

"We wanted to take part because we are a family of four and have a fair amount of food waste especially from the children despite best efforts not to. We currently recycle as much as we can and we have also recently re done our garden. We loved the idea that we could minimise our waste and create something to feed our garden off the back of it."

"We found it more in depth than we though to set up and still haven’t managed to get to the base line yet. I’m sure once we are there it will be plain sailing." 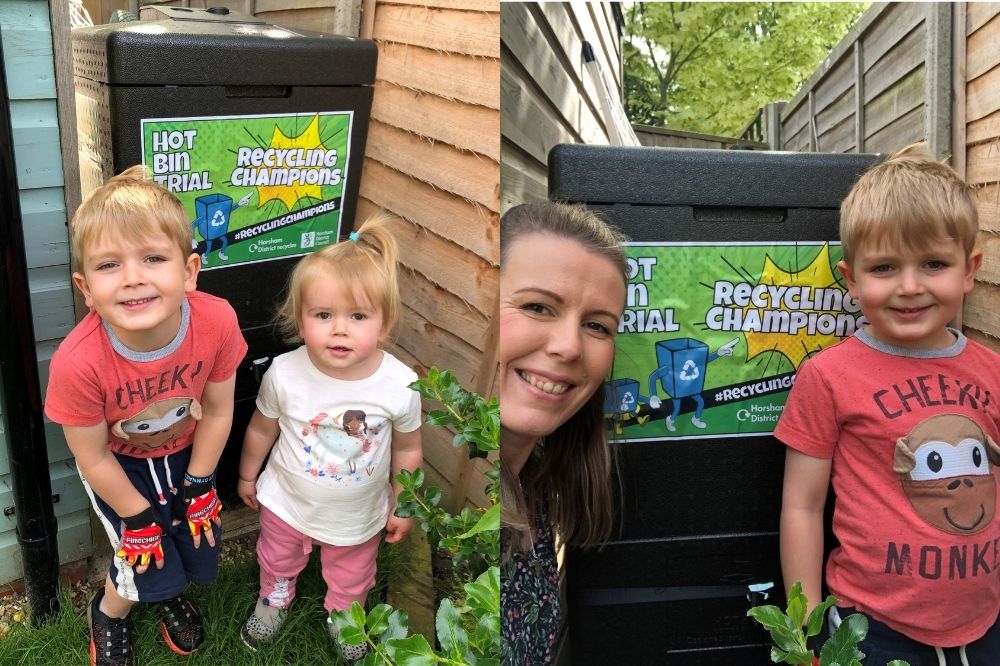 In 2020 we ran our first phase of the Hot Bin trial with 100L bins for 5 families. Read how they got on throughout their trial.

"We decided to have a go at the hotbin trial as we have a couple of normal compost bins, and it looked as though the hotbin would work better and the compost could benefit the ground quicker. If this does prove to be correct, we will have improved soil to have better returns from what we plant - maybe a shorter time from plant to harvest? We will see."

"We found the hot bin excellent! We use it for waste food stuff from our daughter's family and mother's flat too. It has never been full as it decomposes quickly now it is actually hot. We had the devil of a job to get it started so that could be a problem for some people, but simply persevere! So, all household food waste from 3 households goes into it and there is about 1/4 still to fill it. We grow a fair bit in the garden and all leaves, and roots/scraps are put in the bin. Previously we had 4 on the go, but now we can compost 'harder' stuff like twigs and leaves (for leaf mould) which we were not doing before. It should be an essential part of the garden for everybody; which would reduce the burden of communal disposal."

"I signed up for the trial as it’s completely up my street as I try my best not to create waste, recycling and composting where possible. It really caught my eye as you can compost quite a few things that you can’t put in a wormery, such as waste meat and fish off cuts. We eat a lot of veg and my wormery is getting quite full with peelings."

"I was concerned about the amount of paper that needed to go in at first, but we actually have loads. None goes in the recycling anymore. We’re gradually raising the temperature - battling the cold outdoor temperatures!"

"The hot bin is really good. I have a really quite small garden and found space for it. I had a wormery before starting this trial and that was a little limiting as you can’t put certain things like onions or citrus in that. The hot bin takes everything. You just have to take time to cut some things into smaller pieces to speed up the composting process.

I’ve cut down my household waste even further to the point where I have no food waste, just packaging. I’ve harvested some compost and it’s really good quality, no food bits that haven’t broken down yet (you could pop them back in for a second go if you did find this though). I would recommend it and have been telling people about it."

"We decided to take part in the hot bin trial to help reduce the amount of waste created by our family of four going to landfill and for the opportunity to use our kitchen waste to produce our own compost to improve the soil structure for our future vegetable growing."

"We are almost at the level where we can use the kick start bottle to help reach optimum composting temperature.

My best tip so far: make the items going into the hotbin small. I think cutting items to about 4cm pieces is recommended and have found doing this has greatly increased the speed in which the food items are composting."

"Using the bin was something all of the family got involved in. The kids were fascinated with the composting process and it actually encouraged us to be in the garden more as we were using the compost while building our vegetable patch.

"I found the hotbin fairly easy to use but have learnt that you do need to keep observing it to ensure it has the right balance of waste products to work at its most productive. It took quite a while to establish a foundation that would reach the optimum temperature for composting but once we were there, the hotbin has been truly amazing for our family."

"We’re relatively new to the composting scene and are really excited to reap the benefits of a hot bin and all that it can do! We decided to take part in the trial as we’re always keen to try out new things and were wanting to more readily compost our cooked foods."

"It’s been holding at 70F, even covered in snow!

We have been surprised by how much weight we have added to the hot bin in just one month. We just put our refuse bin out for collection last night only to find that in two weeks we haven’t even put one bag in, such is the ability to recycle and compost now!

We have also been really enjoying the liquid gold coming out of the hot bin. Every week we get a good 1-2l of pure fertiliser pouring out from the tap, which we use to feed all the plants and trees beginning to show signs of life as we head towards spring."

"It is going really well, although we added a number of twigs in clearing up the garden and the temperature really dropped after that. So we cut them all up a little smaller and added the hot water bottle and it restarted within 24 hours.

"Be sure to cut up any twigs into smaller 5-10cm sections to ensure the bin remains hot and allow the compost to break it down more easily. We added twigs that were too big, but on realising that, we cut them up adding the hot water bottle and things were back up to speed in no time!"

"Our household waste has significantly decreased as we are now able to compost almost all organic matter. We definitely recommend getting a Hot Bin and making full use of it."

Amanda lives in Horsham with her family.

In our first video, Amanda talks to Councillor Philip Circus, Cabinet Member for Environment, Recycling and Waste, about the project and why she wanted to get involved.

In her September video, Amanda tells us more about using the caddy for her family of four, and shows us:

The Coakleys have reduced their general waste by over half in just six months! They have composted some 115kg of food waste by using the bin, saving this food from going to waste.

Amanda said: "We are absolutely grateful for the Hot Bin and I don’t think we’ll ever go without it again. The benefits have been amazing. We’ve seen a big reduction in our residual waste, and we have no odour from our kitchen bin.

There is now a consciousness in our household about not producing waste, that wasn’t there before, and best of all we get compost for the garden!"