From summer 2021 until autumn 2022 we are undertaking essential maintenance and improvement work to improve the health of Horsham Park Pond.

As well as being a popular visitor attraction, the Horsham Park Pond is an attenuation pond. This means it gathers excess surface water, alleviating pressure and capturing pollutants that may otherwise enter the River Arun.

The pond has now become heavily silted which reduces its capacity for storage. In addition, the sluice requires repair.

The project will include the dredging and excavation of silt that will be deposited in the park, near to the pond for a period of at least nine months to dry out. Work of this nature has been undertaken twice before, most recently in 2002.

The first stage of preparation work started on July 26 2021.

All works will be undertaken with as little physical impact and long term effect on the park as possible.

There will be no work undertaken at the weekends to minimise visitor disruption. 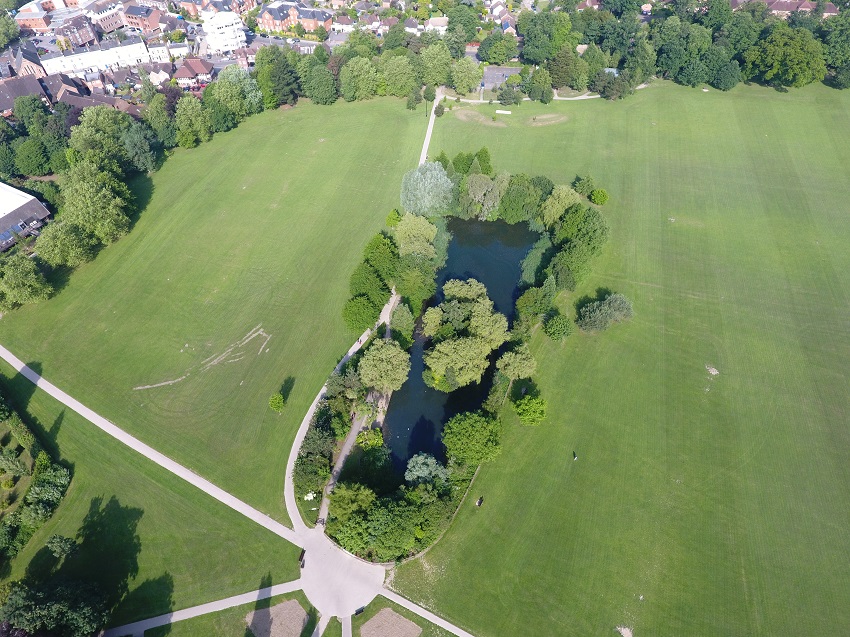 The improvement work completed so far include:

Final work still to be completed include:

How we have minimised any impact on wildlife

The Contractor produced a Construction Environmental Management Plan prior to the works commencing which ensured that works ere carried out in compliance with environmental and wildlife legislation. This included measures to  avoid or reduce the impacts during the works activities to aquatic and terrestrial habitats and species.

In order to make sure you're fully up to date, we've published the full project timetable below and will continue to keep it updated.

The appointed contractor, Salix River and Wetland Services, will commence the advance preparatory works for the main start on site from 6 September. Their specialist aquatic consultant will commence the health checks for the current fish stock. This will determine if they can be transferred to a new location.

We will carry out spot checks to ensure there are no late nesting birds prior to the works commencing.

The birds and waterfowl will naturally disperse and return as the work begins and ends. It is not envisaged that any intervention will be necessary. There will be minimal disturbance to the margins of the pond and other habitats should not be affected.

Nine trees within the pond boundary will be removed or significantly cut back to create gaps in the fringe vegetation allowing more light in and open up viewpoints. The shrub bed on the western side of the pond will be cleared as it provides a good habitat for rats.

The work will be carried out by our retained tree contractors. All arisings will be taken off site and the area will be left clear. Work is expected to last 4 days, during which the pond will be closed to the public. During this time, there will be noise which may affect visitors to the park.

The timing of this work has been scheduled to avoid the bird-nesting season.

Updated: 6.08.21 - Due to the adverse weather this week, final tree works will be completed onsite during the w/c 9th  August.

The appointed contractor will arrive on site on Monday 6 September.

Access to the park will be via the North Parade car park.

To protect the grass and tree roots, track matting will be laid from the car park to the works compound area and deposition site (shown in the plan below). 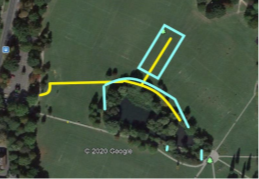 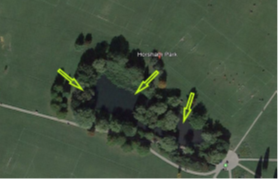 The compound location has been chosen as the closest to the site that will least affect the tree canopy.  Access to the football pitches should not be affected.

Temporary heras fencing will be erected around part of the perimeter of the pond and the haul route from the pond to the deposition site. The existing infrastructure (benches and bins) will be temporarily removed to facilitate access for the works.

The Contractor’s specialist aquatic consultancy will arrange for and supervise the fish removal and their transport before the water is drained from the pond. Healthy native fish will be re-located to a site agreed with the Environment Agency. Healthy native fish that is not re-located will be returned to the pond at the end of the works when the pond has refilled with water.

Draining the pond and tree removal

The water from the pond will be slowly drained over three days. This will be continuously monitored and presents no flood risk to the park or property.

Removal of a silver birch (to facilitate access) and the fallen large White Willow in the centre of the pond will then take place. The contractor may need to trim back the branches of some of the trees for access.

When the pond is drained down, a check will be made for any remaining amphibians which will be rescued and placed in a suitable nearby location such as dense scrub.

Once the water has been drained down, the Contractor will be able to carry out a condition survey of the existing outfall sluice at the western end of the pond. Some vegetation clearance will be carried out to facilitate this. It is expected that the required repairs will be carried out at the same time as the de-silting works but the extent of the repair work will not be known until the condition survey has been carried out.

Throughout the project there will be heavy machinery on-site. This will include two long reach excavators and dumper trucks. In addition, there will be lorry movements in the park whilst this machinery is delivered.

Throughout the project, work areas will be signed and fenced and all staff will be in appropriate PPE. Vehicles will be restricted to 10mph in the park.

The desilting and dredging is expected to take nine days and has been scheduled to take place when the schools have returned and the park will be quieter.

The silt material removed will remain in the deposition area, contained within appropriate fencing which will allow the water to drain but minimise the risk of leachates and mess.

During this time there may be issues with odour, but it is expected these will quickly dissipate.

The dried out material will be shaped and blended into its surrounding levels and then grass or wildflower seeded. Litter picking will be carried out if required.
With the current drying conditions, we expect to begin work on the re-shaping of this material in September 2022.

Refilling and re-instating the benches and fence

It is estimated the pond will take 10 days to refill, depending on the weather conditions.

The final stage of the project will be to re-instate the existing three rail fence and benches.

The pond is due to re-open to the public by mid-October 2021.

Contractors will be on-site w/ 14 March to undertake some essential work to remove fallen branches lying on the ground around the pond  The site will be checked for ground nesting birds prior to any work commencing. This work is expected to take several days and the pond area will remain open.

This work is in preparation for the replacement fencing work  which is due to begin in April (weather dependent)  and take up to two weeks. Once again this area will remain open throughout.

Work will begin on re-designing the pond viewing area.

Further information will be on this page as and when available.

The sediment in the fenced area, which was removed in 2021, is now dry and ready to be re-shaped and integrated in to the park landscape